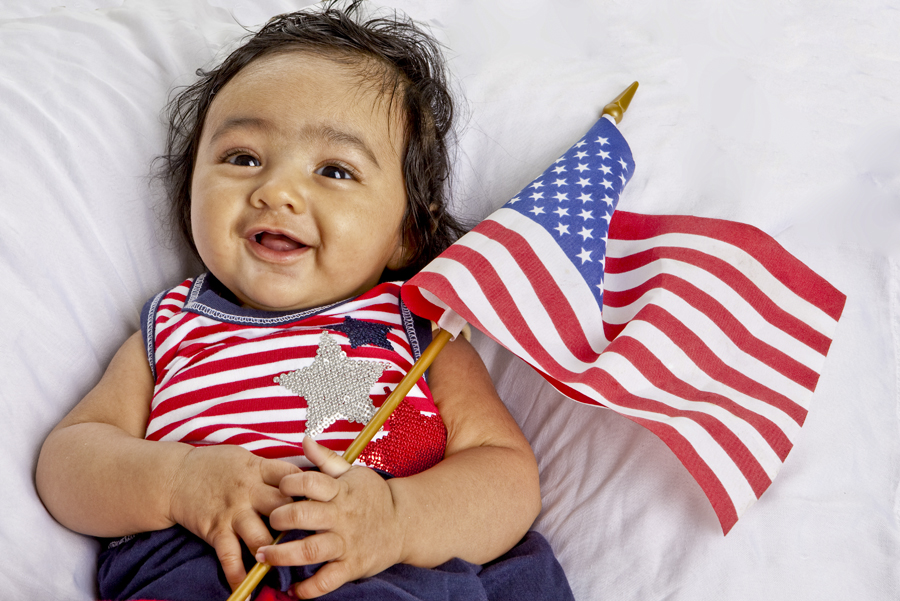 When you’re a new, financially insecure immigrant, raising a child isn’t easy. This is especially true if your new country is vastly different culturally from your home country, as is the United States compared to India.

My husband and I arrived in USA chasing a dream of higher education (me) and better career opportunities (him). Barely 11 months after we arrived, we found ourselves holding our first-born – a daughter who we named Ananya, meaning unique in Sanskrit. She was a dream to hold- bright eyed, head full of long dark hair, and absolutely beautiful.

We were both the fumbling, first-time parents. I was on a students’ salary in Philadelphia, and my husband earned barely enough to get by in New York and take the train down to Philly on weekends. We had no support in USA – social, financial or otherwise. So my parenting challenges were not just about learning how to change diapers or to breastfeed; I also had to  figure out how to pay for my baby’s needs —without getting intimidated by the ways of this new country.

“The American health care system, with its emphasis on personal insurance, was bewildering, and occasionally frightening as well. In India, one just walked into a doctor’s office… Appointments were unheard of.”

The very first challenge came even before Ananya was born. At that time, I had health insurance through my University while my husband was uninsured. During my prenatal visits at the hospital, I was told that I HAD to have insurance in place for the baby before she was born. I was in my third trimester, when a hospital employee reminded me that if I didn’t have insurance for the baby in place by the next prenatal visit, they’d have to “make arrangements”.  That scared me. I took it to mean that someone would take my baby away – a fear that had been passed down to me by other immigrants. Suddenly, I felt terribly alone. I called my parents. My husband and I both come from well-established, educated, middle class families who strongly supported our decision to seek a better future for ourselves. And yet, they were as clueless and even more afraid than me of losing the baby. I stopped telling them my “problems”. It seemed there was no one to turn to.

The American health care system, with its emphasis on personal insurance, was bewildering, and occasionally frightening as well. In India, one just walked into a doctor’s office or the government-aided health care centers and hospitals. Appointments were unheard of.  As a patient, you generally didn’t ask a doctor any questions, about treatment or anything else – because in India, doctors are considered life-givers on earth. They can do no wrong. They are irreproachable.

So I was reluctant to talk during my hospital visits. I mostly listened, nodded a lot and dutifully came back for my next appointment. Having a graduate degree hadn’t helped me overcome the awe of a doctor’s white coat. Asking about health insurance at the hospital never even occurred to me. Information from other sources regarding affordable insurance plans was neither forthcoming nor informative. I ended up adding Ananya to my student plan as suggested by the HR administrator at my University. Sadly, that took away a third of my post-tax stipend. But I heaved a sigh of relief when I was able to walk out of that hospital with my baby in my arms. I thought that was the end of my troubles.

A week later, came another blow. My mother-in-law’s tourist visa was rejected by the US embassy in New Delhi. That meant she couldn’t come to help us out with caring for Ananya.  We had counted on her staying with us for at least 3 months after I went back to work. Since we had no fallback option, I scrambled to find a caregiver before my 5-week maternity leave ran out.  I visited every day-care center in the area, but they all had wait-lists of 6 months or longer. One of my colleagues at the university (another new immigrant, but with no children yet) suggested that I talk to visiting parents of other Indian families.

She said, “That’s how people from my country take care of their newborn,” she said.” Our parents help our friends out. After all, parents don’t speak much English, so they have nothing much to do during the day and get bored. Plus they always come for at least 6 months.”

That made sense. I had seen plenty of immigrant grandparents in my neighborhood park with babies and children swarming around them.

So, I put up a flyer in the Indian grocery store looking for an older-age babysitter. A couple of weeks passed before I got a reply from a cab driver whose mom was interested.  She was also going to stay in Philadelphia for at least 2yrs. The downside: she spoke neither English, nor Hindi – the only two languages we were fluent in. Although disappointing, this wasn’t entirely surprising. After all, India is a hugely diverse country with 22 official languages and over 1600 regional dialects.  I met with her, and decided we could communicate in gestures, a few words of English and a smattering of Hindi and Bengali. After all, babies don’t speak either, I told myself. So not communicating wouldn’t matter to Ananya. Another upside was that the woman was being reasonable about money. And I had to return to work in just about a week.  Plus I had no other alternative.

If I had any misgivings, I locked them away way back in my heart. I didn’t even discuss this decision with my parents or in-laws. Amma (grandma) became our babysitter.

The first day I went back to work after Ananya’s birth, everyone at work was curious about where I had left her. I told them my babysitter story. Almost everyone looked horrified, alarmed even.

“How do you know she is reliable? Did she have references?”… No

“Are you sure she doesn’t do drugs or alcohol?”… No

“What if she harms your baby during the day? Or runs away with her?”… Oh my Gosh! No! I hadn’t even thought of it.

My misgivings returned with a vengeance. The following few weeks, I walked back to the baby sitter’s home from work at least three times a day, unannounced, ostensibly, to feed the baby. I called the babysitter every hour – even though we couldn’t communicate, hearing her voice assured me that she hadn’t run away with Ananya. It took me a whole 6 months to settle down into trusting Amma with my child.

Ananya grew up healthy and happy with Amma. She understood four Indian languages. She danced to Indian music on TV and loved watching Dora, the Explorer. She was like every other toddler on the street. But she was not talking even by age 2 and was extremely shy on the playground. The pediatrician was concerned about her restricted vocabulary and inadequate social interaction. He prescribed interventional treatment. Then a friend suggested moving her to an accredited daycare center first, to see if the environment mattered.

With our post-insurance finances, affording daycare centers was incredibly daunting. I was unsure about Ananya’s ability to interact with predominantly English-speaking teachers at the school. More than anything else, I worried about defying doctor’s suggestion of treatment. Would they take my baby away if I didn’t do as the doctor advised?

Nevertheless, my husband insisted that we send Ananya to a preschool. And fortunately, he was right. Within a couple of weeks, she could express herself fluently in English, like every other two year old in preschool, and three months later, our pediatrician told us that Ananya would not need intervention treatment.

We’ve come a long way since our first child was born. I am still an immigrant, albeit naturalized. Along the way, I’ve learned some important lessons. Lessons like:

And finally, ask questions. People here in the USA don’t get offended if you ask them to repeat themselves, or to explain again. Let them know that you don’t know what to do. Listen to them. Make sure you understand. Unsolicited advice is harder to come by here, than in India!

Wow, this was usefull. Keep writing this kind of stories, you will get a lot of people to this blog if you continue working on this.