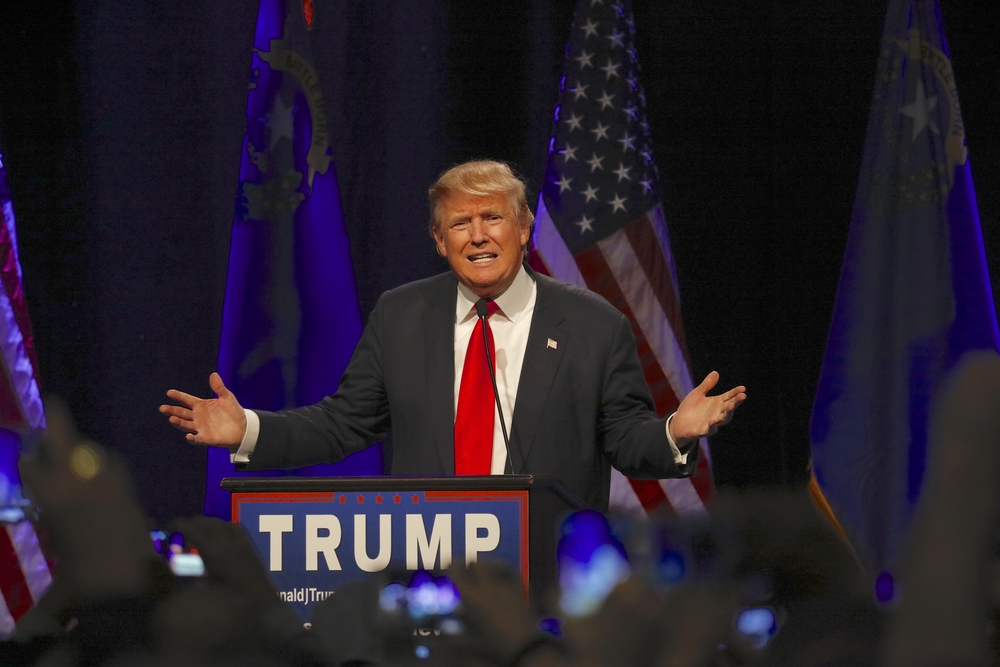 Donald Trump accepted the GOP nomination for President in a combative speech Thursday night at the Republican National Convention in Cleveland, slamming immigrants while linking them to rising crime rates and taking away jobs from American citizens. Trump also echoed his campaign’s controversial promise to build a wall on the Mexico-U.S. border.

“We are going to build a great border wall,” said Trump to a cheering crowd, saying this will “stop drugs, crime and violence.”

While some Trump-watchers expected a general election ‘pivot’ to a more mainstream message, this remains unmistakeably clear: The GOP nominee for President of the U.S. is still turning his back on immigrants, an increasingly important group of voters, and the greatest group of entrepreneurs in America.

Through his highly successful books, seminars, and his TV show “The Apprentice,” Donald Trump has promoted achieving the American dream through entrepreneurship, which is why it’s so perplexing  — and infuriating — to see him turn his back America’s most dynamic group of entrepreneurs — immigrants!

Given Trump’s remarkable ability to recognize opportunities – one of the keys of being a successful entrepreneur — why on earth hasn’t he, as the official Republican presidential nominee, recognized the immense value that immigrants offer this country?

Why doesn’t the Republican nominee for President recognize the immense value and opportunity that immigrants offer this country?

The truth is that immigrant entrepreneurs are an engine of economic growth and a key to America’s future prosperity. Consider these telling (and woefully underreported) statistics:

Every time I highlight these eye-popping stats at a business meeting, people are amazed. Why? Because they’re not used to hearing about immigrants in a positive light, our positive voices are simply being drowned out by the ill informed rhetoric being touted by Trump and many of his supporters.

Why aren’t we talking about the fact that immigrants account for some 30% of new small businesses created every year in America?

So here’s my question for The Donald: Instead of building walls and sending people “home“, why aren’t we talking about the fact that immigrants account for some 30% of new small businesses created every year in America; that they have created 1 out of 10 private sector jobs for Americans; that they contribute billions of dollars to our tax base —all at a time when native-born entrepreneurship has hit a 30-year low?

Immigrant firms employ 1 out of 10 Americans.

As immigrant-created companies grow and succeed, they increasingly become the engine of the US economy, creating jobs and opportunities right here in America, while so many larger US companies continue to outsource jobs to China, India and Mexico. Go to any major US city, and you’ll find that immigrant businesses are helping revitalize lost neighborhoods and communities ravaged by a failing economy.

As an immigrant entrepreneur myself – I co-founded DiversityInc.com in 1999 and then launched Immigrant Business in 2013 – I have a highly personal yet informed perspective. Like the vast majority of immigrants living and working in the US, I love my adopted country. I’ve been lucky enough to be able to come to this country, to take advantage of the opportunities America offered and to build a new life. Unlike most native-born Americans, we immigrants still see this country as the land of opportunity, the one place in the world where your dreams can really come true. Why? Because so many of us come from countries where such opportunities, freedoms and liberties simply don’t exist.

Isn’t it time that we hold a real conversation about the value that immigrants bring to America? And how we should welcome immigrants, and nurture their entrepreneurial spirits, rather than focus solely on the hot-potato politics of banning whole religions, building walls and kicking people out?

Together, we can change the nature of this conversation, from polarizing and destructive to a highly constructive dialogue. By encouraging and welcoming immigrant entrepreneurs we’ll rebuild our economy, create jobs and really make America great again.

This is amazing and you’re right, no one ever talks about this- wake up Trump!

Thank you for speaking up, Foulis. You are so right!

To undermine the value of immigrant entrepreneurship is the biggest mistake that someone who is running for office can make!

Thank you Yanki. Spread the word on how immigrant entrepreneurs are contributing to this country and keep up the great work at BCNA.

Trump may be encouraging to entrepreneuers, but his xenophobic remarks do the harm and cast a shadow on all minorities as bad people…

let them deport all immigrants legal or illegal and turn USA in to chaos. China, India and other BRICS country will soon lead the world in innovation and economic activity while messiah of capitalism and human rights turns itself into an island nation of bigots surrounded by walls. Amen.

Trump just doesn’t get that you cant insult a whole group, and then also say you love that group when it’s convenient… and I had no idea immigrants created so many businesses, more people should know about this!

This is such a misleading article. The “vast majority of GOP candidates” are not espousing sending every immigrant home or blocking entrance of legal immigrants. Hey Henny Penny, the sky is not falling on immigrants wanting come to the US. The real issue is not immigration (or xenophobia – which is the liberal response of name calling every time someone refuse to agree with their position) but illegal immigration. The majority of Americans (including conservatives and Republicans) truly appreciate the value immigrants add to the country and have zero issue with legal immigration. In fact they fully support immigration when done under rule of law. The issue is with illegal immigration where individuals want to reward citizenship to groups of individuals that have begun their lives in the United States while directly ignoring the country’s laws, What is uncompassionate or unreasonable about requiring those that want to share in the opportunities and blessings of the United States to abide by clearly established immigration laws. If it is truly a safety or life-or-death issue there are ways to seek asylum (but that is not the pretense under which the vast majority enter the country but rather for a better life). I understand the attraction to the US and the freedoms it can provide. But that freedom comes at the price of being willing to follow the rule of laws as established in the US. The United States vastly exceeds all other countries in regards to the total number of people admitted with what I would call a ‘clear path to citizenship. This path to citizenship is a clear example of our understanding that immigrants can, and very often do, bring great value to the US. The country has, and will continue to welcome immigrants. But the welcome stops when those immigrants intentionally ignore the rule of law.

“Give me your tired, your poor, Your huddled masses yearning to breathe free, The wretched refuse of your teeming shore. Send these, the homeless, tempest-tossed, to me: I lift my lamp beside the golden door.” ―Emma Lazarus’ poem, inscribed on the Statue of Liberty. Just remember that the people (immigrants) seeing this were legally coming into the country through Ellis Island.

Just come into the country legally. Go through the proper channels. Respect the laws of this country. Go home if you cannot.

Nono nono……lets stay on trac here no missleads. All he asks for is documentation

Perhaps you do not know that he, Rosa Parks, and Mohammad Ali received the The Ellis Island Medal of Honor in celebration of “patriotism, tolerance, brotherhood and diversity.” in 1986…….

“The National Ethnic Coalition of Organizations – NECO- was created on the conviction of its founders that the diversity of the American people is what makes this nation great. Its mission is to honor and preserve this diversity and to foster tolerance, respect and understanding among religious and ethnic groups. Additionally, NECO continues its commitment to the restoration and maintenance of Ellis Island, a living tribute to the courage and hope of all immigrants.

NECO sponsors the Ellis Island Medals of Honor which are presented annually to American citizens who have distinguished themselves within their own ethnic groups while exemplifying the values of the American way of life. Past Medalists include six U.S. President, one foreign President, Nobel Prize winners and leaders of industry, education, the arts, sports and government, along with everyday Americans who have made freedom, liberty and compassion a part of their life’s work.

NECO’s mission is threefold: preservation of the Ellis Island monument; to honor and preserve the diversity of America especially in regards to fostering tolerance and understanding among religious and ethnic groups; sponsoring a wide range of humanitarian endeavors, nationally and internationally, in partnership with existing organizations that share similar goals.

NECO is the sponsoring organization of the Ellis Island Medal of Honor.”

You still don’t get it Foulis. You are looking at reform movement here, at a rebalencing and realignment of priorities, none of which will ultimately work against your immigrant business audience. Easy enough to continue the witch hunt, but if you are watching closely, you should at least consider the vote just taken: For legal immigration, For small business tax reduction, For US reconstruction, For fairer trade and US jobs creation. You clearly don’t like it, but economic nationalism and freer market populism focuses on the betterment of all the people here. You have a new president “for all the people”. In time, more and more people here will come to trust what the man promises. Unlike most before him, they will see him do what he says. People in small business, no matter what their extraction, stand to win big here. Wall Street knows it, those who voted for him buy it; leaders from around the world are banking on it. And its only just begun. Have a little faith. Bank on your own readers. They’ll get it if you won’t.

“NECO- was created on the conviction of its founders that the diversity of the American people is what makes this nation great.”

No, it is our Constitution, our economic system and our God given rights that allow a diversity of people to survive and prosper in America.

THAT is what makes this nation great.