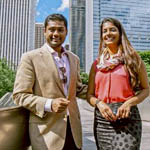 When she was in fourth grade in Calcutta, Shradha Agarwal started a business lending books to classmates for a small fee. When her teacher found out, she forbade the fledgling entrepreneur from continuing her activities. Agarwal kept doing it anyway, just in secret.

That kind of determination is typical of Agarwal, the daughter of an accountant and stay-at-home mother, whose dream was for her daughter to move to the U.S. “When I was 10 years old, my mom sat me down and said, you are going to go to America someday,” she says.

When she did move to the U.S. in 2006 to attend college, she brought her determination and entrepreneurial inclinations with her. While still in school, she co-founded ContextMedia, an ambitious startup to deliver health-care information on TV monitors for patients sitting in doctors’ waiting rooms. Today, the company works with some 4,000 hospitals, healthcare systems and private practices nationwide, and has created 54 jobs in Chicago and seven in New York City. Over the past three years, the company has doubled year-over-year growth, and Agarwal expects to continue doing so in 2014.

Agarwal came to the U.S. to study journalism at Northwestern University in Evanston, Ill. There, she co-founded a magazine about the role business can play improving people’s lives. And she became intrigued by the idea of putting digital screens providing information in unusual venues, say, taxicabs with little screens which would convey tips about healthy eating and exercise —“fun facts”, as she calls them.

Based on this concept, Agarwal and two of her classmates started toying with an idea for a new enterprise: putting TVs in doctors’ waiting rooms with engaging, educational content. Both Agarwal and Rishi Shah, the son of an endocrinologist, came from families with relatives who had diabetes and other serious diseases, and they understood how vital it is for patients to take the right steps to manage their conditions. And a critical element in patient compliance is making sure they receive accurate education.

But to have an impact, the information has to be received at the right time, and in the right environment. Then it occurred to them: Why not target waiting rooms, places where people would be receptive to hearing health information presented in a clear, entertaining way? Not only would this be the ideal environment, but also patients would be, in effect, a captive audience.

The best way to accomplish their goal was to show educational videos that would either be streamed or downloaded to a small media player connected to a flat screen television in waiting rooms. An algorithm would determine the content shown in each location. The content would be presented in a rotating loop; there also would be optional weather and news updates. And on a sidebar would be information about staff members, tailored to the specific medical practice. Initially they would focus on diabetes, then gradually introduce several other widespread diseases, including rheumatoid arthritis, heart disease and multiple sclerosis.

Why not target waiting rooms, places where people would be receptive to hearing health information presented in a clear, entertaining way?

Programming would mostly come from a variety of partners, from media companies to non-profits, such as the American Diabetes Association. And any gaps would be filled in with content created by the ContextMedia staff. Since not all patients would come from the same backgrounds or respond to the same messages, content would be tailored to different socio-economic and ethnic backgrounds as well. Content for offices in, say, Chicago’s affluent north side would be different from material broadcast on the south side. “We needed to match the right content to the right partner,” she says. Doctors also could choose their own play list, with videos on treatments aimed at, say, Hispanics or other groups of patients.

But there was a problem –a big one: how to fund this ambitious undertaking. At first, the friends considered becoming a nonprofit and seeking grants, but ultimately they decided that nonprofit status would make it difficult to grow quickly and become economically sustainable. They also quickly realized that doctors wouldn’t have the budget to pay for their service. That meant turning to pharmaceutical companies, other healthcare players, and even nonprofits for advertising dollars. Doctors would be allowed to remove any ads they didn’t approve of. Or they could pay a monthly subscription and have the service ad-free.

Agarwal’s two co-founders dropped out of college to focus on the business. But Agarwal, who was in the U.S. on a student visa, had no choice but to stay put, devoting as much time as she could to the startup while still doing her schoolwork. “I did start to overload,” she admits.

Learning How to Sell

The partners bought 50 TV screens for a pilot in 2006 and set out to convince doctors to try them out. It wasn’t’ easy. Doctors, they found, tended to be conservative about introducing new technology. “No one wanted to be the first one,” says Agarwal. But with each pitch, they learned more about what doctors wanted and “were better armed to answer their questions the next time,” she says. For example, they found out that doctors responded to data, and the more data they could provide, the more convincing they were.

Over that summer, they talked to dozens of doctors throughout the Midwest—some of them recommended by Shah’s father. “We were driving around with TVs packed into our cars,” says Agarwal. The partners would promise to let doctors try it out and if they were dissatisfied, the TVs would be picked up free of charge. And they used an ever so slight amount of subterfuge. “We would tell them that the doctor down the hall was considering our product and we’d love for you to be the first one,” she says. “That often gave them the confidence to participate.”

It took about five weeks, but they finally got a bite. According to Agarwal, it was their obvious dedication that convinced the first doctors to sign on. “One told me he could see the passion and purpose with which we approached our company and that made all the difference,” she says. Still, they often had to revisit doctors’ offices several times before they would agree to a trial. Finally, after a few months, they convinced 50 to take part in a pilot.

The results were positive. With that success, the partners were able to buy more TVs and equipment. They also turned to professors for help getting contacts at advertising agencies. After weeks, one finally offered a proposition: Sign up 200 subscribers and the firm would find an advertiser. By 2007, with plenty of feedback from doctors under their belt, they got to the magic number. Back they went to the agency and they landed their first advertiser, a maker of diabetes medication. And they became cash flow positive for the first time.

Using An Advisory Board

As for funding, they financed the operation initially with money raised from several angel investors, bank loans, and their own savings. Investors largely have been Northwestern professors and friends. In 2007, they also formed an advisory board—it now has eight members– with a mix of professors, businesspeople and doctors. They proved to be invaluable. ”They helped us be better managers and kept us from making mistakes,” says Agarwal.

Take the matter of hiring, a potential tricky area since it was likely they’d bring on board employees who were older. Their advisors helped them decide how to handle the issue in interviews, asking candidates point blank how they would feel reporting to someone younger. “We would see how they reacted to that,” she says. Another advisor, a physician, provided helpful feedback about programming. Then the former CEO of a large company, who was also on the board, worked with them to figure out how to grow the company in an orderly way.

One of the biggest challenges, however, has been finding IT talent for the team; they badly needed programmers, and  a lead developer. In fact, it took three years of looking–and they finally hired someone almost by accident. The company just so happened to have office space in the same building as the 2012 Obama campaign. After the election, one programmer, who wanted to stay in Chicago and also had an interest in improving healthcare, agreed to become Context Media’s lead developer.

Recently, the company added tablets in examining rooms, to help patients have a more interactive experience and sign up to receive more information, such as healthy recipes, later on. They’re also rolling out a system connecting to doctors’ electronic medical records systems, allowing doctors to send a summary of visits to patients with suggestions for how to reach certain goals.

As for expanding overseas, it isn’t in the cards for now, since other countries would require different content. “You can’t expect to take what works in America, dub it and use it in different countries,” says Agarwal. The plan is for the two co-founders (the third left in 2009) to add material about additional conditions and keep expanding into more health care facilities in the U.S.  In 2010, Agarwal, for example, set up an office in New York City, where there are now seven employees. “There’s plenty of room to grow,” she says.

The co-founder of Context Media talks about immpreneurship.

Immigrant Business interviewed Shrada Agarwal, co-founder of ContextMedia, about becoming an entrepreneur in the U.S.

What are the advantages to being an immigrant entrepreneur in this country?

Agarwal: You’re not judged by your name or your age. That was really new to me, really inspiring. Also, this country is very forgiving of making mistakes. It’s an environment where you can try things and bounce back on your own two feet. I also found it a very collaborative environment. Anyone we reached out to, we’d ask for 15 minutes of their time, and usually we heard back.

What advice do you have for immigrant entrepreneurs?

Agarwal: If you keep talking to enough people, there will be those who will mentor you and open doors. And get involved with the community. For us, it was Northwestern and the Chicago community. For others, the answer will be different. But belonging to a community of like-minded people can provide a lot of energy and fuel.

What are the advantages to being an immigrant entrepreneur?

Agarwal: It teaches you not to be afraid to lose anything. Having traveled so far, there’s not much that scares you. You’re not afraid to take chances. Also, being an immigrant, it’s natural to be an entrepreneur. The risks you’ve taken leaving everything behind—that’s what entrepreneurship is all about.