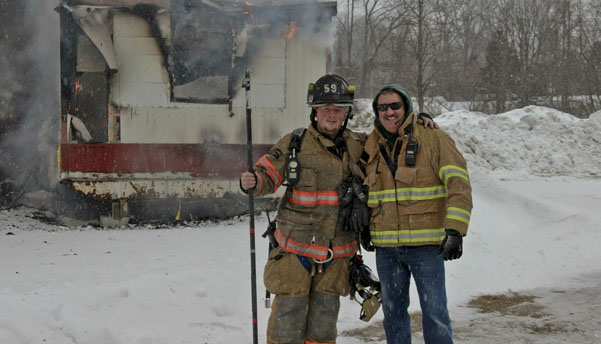 Working hand-in glove with the franchisor and becoming a visible part of the community have made Pestmaster Services a force to be reckoned with in New York’s Hudson Valley,

Although he grew up on the sunny beaches of Florida, Paul Alley (pictured above, right) headed to the cold northeast when it came time to build a business.  Alley had been in the pest control business since college, working as a technician for several companies in Florida, but when his father retired to  New York State, Alley decided to follow him to look for new opportunities.  After twelve years in the pest control business, he was tired of working for other people, and wanted something of his own.

Setting up a franchise always requires capital to cover franchise fees and upfront costs for equipment, vehicles  and office space. Alley was fortunate that his father was able provide the financing.  His father’s confidence in Alley and the Pestmaster opportunity was well placed as the business grew rapidly. Within the first year, the operation expanded from one to seven employees in order to handle the orders, and within five years, Alley’s franchise was profitable.

Related: The Pros and Cons of Friends and Family Financing

Today, Pestmaster Services of Kingston  has eleven full-time employees, and annual sales of $1.6 million.  Expenses include an annual royalty paid to the franchisor, as well as fees for advertising and insurance, which is typical for franchise arrangements.  However, Alley has found there to be considerable upside to the arrangement. Pestmaster.com maintains an active in-house contract department that finds corporate and government business for its franchisees, and they were able to help Alley get a contract with West Point Military Academy, which he has had since 2001.

I would have made more mistakes without having the franchise. You buy a franchise so you won’t have to reinvent the wheel — Paul Alley

Alley has been very happy with the arrangement and says that if he was going into business today, he’d sign up with Pestmaster all over again. “I think I would have made more mistakes without having the franchise. You buy a franchise so you won’t have to reinvent the wheel.”

Go the extra mile too. Do home show events, knock on doors, and make a lot of cold sales calls too. There are absolutely no shortcuts.

Pestmaster Services is a  full-service pest control business. “We do termite work, and nuisance animal control, and aquatic pesticide applications, and we do bird or aviation control, and we do bed bugs,” says Alley. In practice this means being able to extract raccoons, possums or squirrels from a homeowner’s attic or chimney, spray for termite infestations, ants, roaches, and eliminate rodents of all sizes and descriptions. As Alley says, “it requires a lot of different skills.”

In today’s business, that means canine skills too. With the current infestation of bed bugs around the country, trained bed bug dogs have become a key part of Alley’s operation, and a way of differentiating his service from his competitors.  Alley has two dogs that he claims are more than 90% accurate in locating bed bug infestations.

Pest control is an increasing complex business requiring a wide variety of skills, techniques and tools, including a sensitivity to environmental and ecological concerns. Bundle all this together and crews must arrive at the job site with everything they might need to complete the assignment. Pestmaster’s answer to this is a fleet of Nissan cargo vans, fitted out with vehicle wraps, storage racks and ARE shelving.

I absolutely love having Nissans in my fleet. We put high mileage on them, and they just don’t break down.

At one time, Alley used domestically produced vehicles, but discovered he could get a better, more reliable van from Nissan at a comparable price, and hasn’t been disappointed. Today, Pestmaster Services has a Nissan Titan, two Nissan Frontiers, a Nissan NV2500 high-top van, plus a Versa and a new Nissan Rogue. “I absolutely love having Nissans in my fleet,” says Alley. “I really don’t look at the warranty because even though we put high mileage on them — roughly 50,000 miles a year — they just don’t break down.”

“I really enjoy my work and revel in being able to make someone’s pest situation better,” says Alley. This commitment to his community extends to his personal life as well. For the past 15 years, Alley has been a volunteer firefighter with the Spring Lake Fire Department in Ulster County, which means saving lives through performing CPR, rushing into burning buildings and being a first responder to automobile accidents.

Grow Your Business by Listening to Your Customers

How to Exploit the Sweet Spot in Your Industry

The Pros and Cons of Friends and Family Financing

great information and best of continued success to paul and company…

Very thorough and interesting read on creating successful franchise, how much bigger could this kind of business grow?

Great to see that community involvement really enhances the success of a business or franchise!

This site provide Pest Control & Termite control services.It is very informative and I am sure a lot of people will benefit from it.