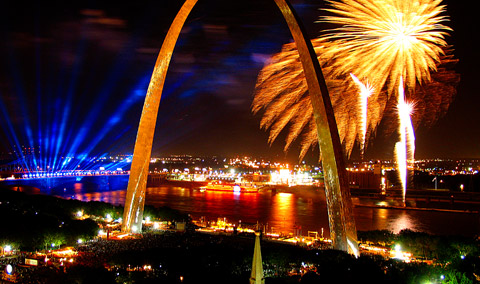 St. Louis, Missouri wants to become “the fastest growing metropolitan area for immigrants by 2020.” How did this iconic American city come to choose immigration as the means of revitalizing its economy?

Two short years ago, the city fathers of St. Louis realized their town was in trouble: it was losing population both to out-migration and retirement, and like a lot of heartland cities who were built on manufacturing, its economic base was crumbling.  And no one knew what to do about it. Then the Kemper Foundation Commerce Bank funded a study by economist Jack Strauss, then of St. Louis University, to find solutions. In the executive summary of his report, Strauss concluded, “there is one clear and specific way to simultaneously redress the region’s population stagnation, output slump, tepid employment growth, housing weakness and deficit in entrepreneurship: immigration.”

Furthermore, the report indicated that influxes of immigrant workers do not take American jobs, as is commonly believed, but complimented them by providing technical expertise at the high end of the spectrum and manual labor at the bottom.

“There is one clear and specific way to simultaneously redress the region’s population stagnation, output slump, tepid employment growth, housing weakness and deficit in entrepreneurship: immigration.“

The report proposed a nine-part plan that would help the region recharge the city’s economy by embracing immigration, and one of them was to hire a person to spearhead and coordinate the effort. A 22-member steering committee chose Betsy Cohen, a senior executive at Nestles Purina and a St. Louis native, who had experience running a regional coalition as well as a long history of working with foreign-born interns and executives. In the nine months since her appointment as director of The St. Louis Mosaic Project, which has the goal of making St. Louis the fastest growing metro for immigrants by 2020, Cohen has galvanized the effort and has become a tireless evangelist for immigration to St Louis.

“The foreign-born who are in our community are better educated and more entrepreneurial than our native-born population.  If we want to grow as a region, that’s an important fact,” says Cohen. She emphasizes that through the Mosaic Project and its partners, St. Louis is paying special attention to foreign-born entrepreneurs, focusing on the needs and services they need to succeed, which include sources for funding, and their overall relationships in the community at large. “You need people who can say they’ve been successful here, and that it’s worked for them,” Cohen says. “When people in the community feel they have been helped, and have become successful, they tell their families and friends. When people find jobs and they’re successful, the word goes out, and other people will follow. You don’t have to advertise.”

“The foreign-born who are in our community are better educated and more entrepreneurial than our native-born population.”

The Business Case For St Louis

A St. Louis native, Cohen stresses that the city has many built-in advantages for would-be entrepreneurs. “The cost of living is reasonable,” she says. “Apartments and homes are a quarter of the price of what you’d find on the coasts.” Furthermore, it’s a wonderful environment for young families with outdoor trails and parks, plus free admission to museums and the science center. Cohen cites examples of entrepreneurs who had started development America’s coastal cities who discovered that relocating to St. Louis both reduced their overhead and cash flow and provided a higher quality of life for their young families.

2. Pipeline of Talent For Immpreneurs

St. Louis also is home to an impressive array of world-class educational institutions such asWashington University, St. Louis University, Webster University and University of Missouri, St. Louis. Typically, universities are touted as a cultural benefit because of the many problems and educational opportunities they offer, but Cohen goes a step further, pointing out that they offer entrepreneurs something even more vital: an educated workforce upon which to draw.  According to Cohen, the universities in the St. Louis area are working closely with community colleges to develop “a pipeline of talent.”

The St. Louis Mosaic has the goal of making St. Louis the fastest growing metro for immigrants by 2020

Similarly, another St. Louis native, Jim McKelvey, the co-founder of Square (the mobile payments company), is running a program to train code developers by pairing local people with coding experts at various companies in the area.  Currently, one thousand people in the St. Louis area are being trained with the expectation that they will provide support to high tech startups in the near future.

The biggest obstacle most entrepreneurs, whether foreign or native born, is finding funding for their new business.  Fortunately, there’s a lot of opportunity in St. Louis to finance startups.  For example, the International Institute of St. Louis, a community development corporation, makes loans of up to $35,000 to immigrants, particularly for retail and lower technology businesses.  Many startup companies are working with the St. Louis Economic Development Partnership, which provides assistance in finding just the right kind of funding for each enterprise, from micro funding to tax exempt bonds for manufacturing. The Partnership is governmentally funded and it operates six incubators, which focus on different industries. According to Ms. Cohen, already 20-30% of the participants in their incubators and start-up companies are foreign-born, or the children of foreign born.

Of course, not every budding enterprise fits within the template of the St. Louis Economic Development Partnership or the International Institute. For early stage companies with higher risk and potentially high returns, there is angel investing.  The St. Louis Arch Angels is a group specializing in medical and biotech startups that offers opportunities to startups and high-risk investors alike.

While these are certainly worthwhile efforts, what makes the St. Louis initiative particularly compelling is that they have designed a roadmap through the individual efforts so that entrepreneurs — foreign-born entrepreneurs in particular — can locate they resources they need in order to succeed.  It’s called the Regional Entrepreneurial Initiative, and it represents $100 million in funding across all the organizations.  Once every quarter, all the leaders of the St. Louis initiative gather to see where the gaps are in their system, and what kind of support needs to be supplied to their various clients, whether it be access to wet labs for bio-medical research, mezzanine funding for a startup, or add-on funding for a company further down the road. “The REI initiative is looking at the whole ecosystem,” says Betsy Cohen.

Creating an infrastructure and raising venture capital to help support startups and grow new businesses is mission critical for St. Louis, but the glue that holds the St. Louis initiative together is goodwill — making St. Louis a welcoming environment for immigrants and their businesses.  To that end, Mosaic’s Betsy Cohen has championed St. Louis Mosaic Project Ambassadors, a small army of volunteers who travel out into the community, frequenting immigrant run restaurants, helping spouses of entrepreneurs find jobs, inviting recent immigrants into their homes, and donating to institutions that assist immigrants. Recently, the Project Ambassadors signed up their 300th volunteer, the honorable Bob Holden, former governor of Missouri. Another Mosaic Project initiative that is already showing bearing fruit is the Professional Connector program. Inspired by a successful program in Halifax, Nova Scotia, it provides professional networking, linking immigrants with local professionals in their fields, creating opportunities for employment, exchange of ideas, and personal growth.

There’s little doubt that the St. Louis program to revitalize their city both economically and cultural through encouraging immigration will have much success, but as a recent report from the American Immigration Council, Revitalizing the Heartland of America, suggests, the ultimate dimensions of that success will be determined at the national level. To get the most out of programs like St. Louis Mosaic, writes author Paul McDaniel, “there needs to be a thoughtful, comprehensive effort to modernize the U.S. immigration system.”

This website whoeheartedly agrees with McDaniel’s statement and furthermore argues that it’s not just the economies of cities like St Louis that would benefit from comprehensive immigration reform, but the country as a whole. We need to take action now before our immigrant job creators decide to head home or head for more welcoming pastures.

I am from Pakistan and have 16 years experience as a ICT Business Entrepreneur, please guide me how can i come to your city and do some business.
Thanks.