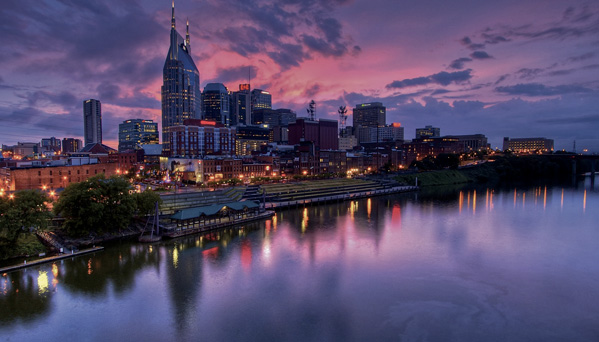 Once known primarily for country music, today’s Nashville is a vibrant metropolis whose growing economy and diverse culture are attracting people and businesses from around the world

Today’s Nashville is one of the fastest growing and economically diverse cities in the United States, and while it’s identification with tourism and the entertainment business remain strong, the city has grown past that to become known for healthcare companies, manufacturing and supply chain and logistic services among many other business sectors, all of which offer a broad range of opportunities to immigrants from around the globe.  According to the Census Bureau, immigrants currently account for 6.4% of the labor force in Tennessee, and they represent an even higher percent of business ownership at 7.2%.

When an immigrant comes to America and considers all of the cities or towns where they could locate, and they choose to live in Nashville, that is an incredible honor to us. — Mayor Karl Dean

Nashville’s mayor, Karl Dean, emphasizes the city’s vitality and the part immigrants have played. “We’re growing, and there’s a demand for people who can go to work, “ he says, adding that Nashville has “definitely benefited from an influx of New Americans, and its done great things for the state.”

Why Immigrant Entrepreneurs Come to Nashville

Nashville’s not the best-known American city, but it possesses assets that make it a vital attraction for immigrants, especially it’s quality of life and affordability. Due to relatively low taxes, affordable housing, low unemployment, and a strong business climate, it’s easier for immigrants to make a start in Middle Tennessee than in many other parts of the country.

Mayor Dean emphasizes the city’s vitality and the part immigrants have played. “We’re growing, and there’s a demand for people who can go to work, “ adding that Nashville has “definitely benefited from an influx of New Americans, and its done great things for the state.”

Another factor in Nashville’s appeal are the institutions of higher learning in and around the city.  There are some 18 colleges, universities and community colleges in the area, most notably Vanderbilt, Tennessee State University, Belmont and Libscom, an abundance that resulted in Nashville being dubbed the “Athens of the South.”

Impressive sounding, of course, but today the impact of noted colleges and universities go beyond bragging rights; they have a direct impact on economic vitality.  They attract students from around the world who frequently stay after graduation to fill critical needs in the labor force, and, even more importantly, start their own businesses that create new American jobs and benefit the tax base.

We’ve experienced a lot of growth and that has happened almost simultaneously with the influx of new Americans. — Mayor Karl Dean

One of the largest immigrant communities in Nashville, the Kurds, came to Nashville as well as other American cities largely through refugee resettlement. However, the experience in Nashville and Middle Tennessee was so positive that Kurds who had been resettled elsewhere, made their way to Nashville to join the thriving Kurdish community there. Since then, the city has become increasingly diverse, and now the area public schools are educating students in English who speak 140 different languages as their mother tongues.”Nashville is benefitting from diversity in real concrete ways such as having more languages spoken, more restaurants of different types, becoming a kind of more dynamic city,” says Mayor Dean.

The city has made a conscious effort… to be a friendly, welcoming city. — Mayor Karl Dean

Nashville has ranked right at the top in various polls ranking cities for friendliness and affordability.  However, being a “welcoming city” requires a great deal more than just being friendly; it requires a serious commitment to providing resources and examining barriers to newcomers. For example,  in 2009 Nashville faced a referendum to require English as the old language in which the city would do business, but to Nashville’s credit, the measure was roundly defeated.  “If it had passed, we might have seen a drop-off in the number of immigrants coming here,” says Dean.  “Since then, the city and the private sector and the non-profit sector have been involved in efforts to make sure that Nashville is a welcoming city.”

Six Reasons Why Immigrants Should Head to St. Louis

Nashville is one of America’s great cities, without a doubt